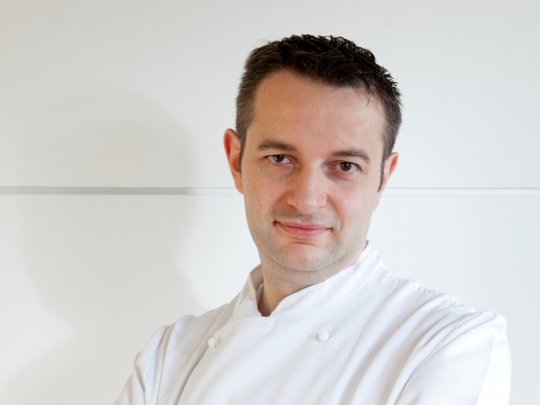 Manuel Ferrari, born in 1978, is a native of Trentino where he attended and graduated at Tione Hotel Management School in Trento.

From 1994 to 1998, he spent his Sumer working in the family refuge in Breguzzo and his Winter as a chef at Diana Hotel in Madonna di Campiglio.
In Summer 1999 he started his collaboration with Grand Hotel Villa Serbelloni, the historic 5-star luxury hotel in Bellagio where he grew up: commis garde-manger, garde-manger chef de partie, saucier chef de partie, entremetier chef de partie, junior sous-chef.
Being the Grand Hotel Villa Serbelloni a seasonal hotel, Manuel Ferrari spent his Winter mor than once at Il Griso di Lecco (1 Michelin star – 2000/2001) and at Badrutt’s Palace in St Moritz (5-star luxury hotel – 2003/2005)

From 2006 to 2010 he alternatively worked at Grand Hotel Villa Serbelloni and on Costa Crociere ships that had entrusted Ettore Bocchia (chef of the hotel) with the planning of the gourmet restaurants of the Costa fleet and the inaugurations of Costa Concordia, Costa Serena, Costa Pacifica and Costa Luminosa.

The turning point was in 2011: Pastry Chef at Grand Hotel Villa Serbelloni when he moved from savoury to dessert keeping the same passion and achieving so much success that 2015 Espresso Guide awarded him as the best Pastry Chef of the year.

Among his activities:
– in October 2015 he worked along with the community of San Patrignano to create a Christmas chocolate panettone, presented in Milan by the community and by Gualtiero Marchesi.
– in October 2017, Manuel Ferrari created “Valle del Chiese” cake created for his home city during “Mondo Contadino”, a typical event on Roncone Lake celebrating the return of the herds from the summer pastures.
Even if he works at a starred restaurant in a luxury hotel, Manuel Ferrari has always stayed in touch with his land.