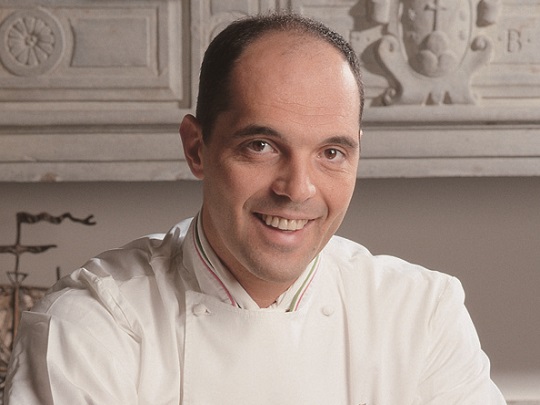 Ettore Bocchia is considered one of the most interesting chef on the Italian scene, even if he doesn’t care much about the worshipping of his character.

Both the press and the connoisseurs consider him the leader of Italian molecular gastronomy, a title conquered studying and researching together with Professor Davide Cassi, a Matter Physics academic at Parma University. Together they wrote the first Italian book on molecular gastronomy “Il gelato estemporaneo” (The extemporary ice cream, Sperling & Kupfer, 2005) that contains memories of the long years of research and some of the most famous recipes such as the turbot cooked with melted sugars, the egg coagulated by alcohol, the ice cream frozen by liquid nitrogen, the use of soy lecithin as a thickening factor and many others.

Bocchia widens his studies with Professor Brandolini, form Ferrara University, researching about an original use of inulin.

In 2004, the national newspaper Il Corriere della Sera published a joint interview to Gualtiero Marchesi and Ettore Bocchia, comparing the great pioneer of the past with one of today’s most important innovators.

He’s really enthusiast about natural and wholesome food. He built a network of excellent suppliers, mainly small and passionate producers.
His scientific expertise made him one of the top experts in haute cuisine for great numbers, one of the only chefs in the world who are able to prepare a lunch with the highest standards for thousands of people at the same time.

TOP CLIENTS
In addition to the managing of Grand Hotel Villa Serbelloni’s restaurants, he’s been corporate Chef Research and Development and managed the Club restaurants on the Costa Crociere for the Mediterranean Area.

He created menus for: The double launch of the twins Costa Pacifica e Costa Luminosa; the LHC inauguration at the CERN in Geneva; The Michelin Guide dinner for the star awarded chefs.
He is continuously requested by Universities and scientific institutions all around the world for seminars, workshops and conferences.