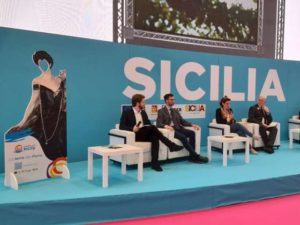 The district of Western Sicily presented at BIT their site dedicated to promote tourism in the area around Trapani that still has a lot to be discovered.

Sicily is a wealth of treasures of ancient origins that fascinate visitors today.
In Western Sicily there are so many beautiful places to visit as the Archaeological Park of Segesta,Selinunte and Cave di Cusa archeological site; the natural reserves of Capo Feto, The Zingaro Reserve, Monte Cofano Reserve; the salt pans of Trapani; the Egadi islands and Pantelleria; the museums telling the story of the island and its traditions: tuna processing, salt harvesting…

Among these, the fascinating story of the Florio Cellars has been narrated by Stefania Auci, author of I Leoni di Sicilia, the first book on the Florio family, creator of the famous Marsala Florio wine.
Florio Cellars can be visited and also offer planners meeting halls in a very atmosphere venue. The cellars testify a glorious past, but are still today a flagship for the production of Duca di Salaparuta wines and the award-winning Marsala Florio that conquered the rest of the world.

Participants involved in the press conference of Western Sicily were (in the photo from left to right):
– Mario Luongo, journalist
– Francesco Melia, historian
– Stefania Auci, the author of I Leoni di Sicilia (2019) and L’inverno dei Leoni (2021) on the history of the Florio family.
– Luigi Biondo, now in Palermo and previously director of the Regional Museum “Agostino Pepoli” of Trapani
– Peppe Giuffré, chef and ambassador of the taste of Sicilian cuisine
– Rosalia d’Alì, president of the Western Sicily Tourist District

Manlio Messina, tourism and entertainment councilor of the Sicily Region also attended and greeted the participants.

A tasting of Marsala Florio wine, some food delicacies and the famous Sicilian cannoli prepared by chef Peppe Giuffré concluded the presentation.

The venue Florio Wineries
Built in 1833, Florio Wineries are part of the circuit of Marsala and Sicily’s excellences and welcome every year visitors from all around the world. Cantine Florio offer 6 historic halls (3 of them connected) that can host up to 350 people seated, 300 for the buffet, and 500 standing. The wonderful Mediterranean garden may host up to 1,500 people.