Plant-based raw burger to launch at vegan restaurant in London 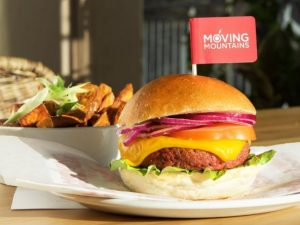 B12 is the name of the UK’s first ever plant-based raw bleeding burger, created by cruelty-free British company Moving Mountains. After two years in development laboratories, the £10-B12 Burger is ready to be launched at the trendy, plant-based Mildreds restaurant in Dalston, East London.

The recipe includes oyster mushrooms, beetroots, vitamin B12, coconut oil, 20g of plant protein and no cholesterol.
The burger, that sizzles in the pan and goes golden brown, is served with the traditional fixings (patties, lettuce, onions, tomatoes) and a side of French fries.
Its production requires less soil and water than regular burgers, as well as lower greenhouse gas emissions.

Veganism is slowly changing food consumption worldwide, and is now so much more than a trend. The vegan lifestyle is attracting the attention of many investors, including Bill Gates.