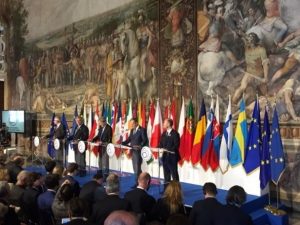 At the celebration of the 60th anniversary of the Treaties of Rome, Tecnoconference Europe–Gruppo Del Fio supplied all the technologies for the prestigious event and also took care of the scenographic part of the meeting room and Campidoglio Square.

The interpreters cabin for the simultaneous translation in five languages, were located in the room next to the principal one, the Orazi e Curiazi room, while the sound system and images projection on wide led screens  worked with sinergy with Rai, that live broadcasted the European event.

A fibre optical system connected the Protomoteca Room with an outdoor tensile structure, the Legal Profession Library and the Little Protomoteca Room, where there was the press rooms for all the international journalists, radio and televisions of the whole world.

Gran finale with a fast scenographic and technical change of five platforms for the press conference.

Tecnoconference Europe – Gruppo Del Fio is one of the biggest suppliers of services and technological products for events in the center of Italy. Beyond audiovisual systems and equipment, they’re able to supply a complete service from the creative project, to the concept development, to the scenography projection, to the technical development.