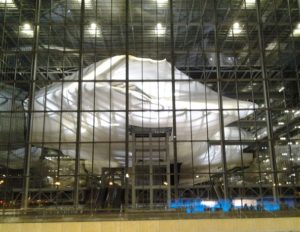 In Roma-Eur, on Saturday October 29th it has been inaugurated the Roma Convention Center, also called “Nuvola” (cloud), projected by the archistar Massimiliano Fuksas. For the preparation and the realization of what has been the year event for the Italian meeting industry, Tecnoconference Europe – Gruppo del Fio supplied the camera system with a triple camera full HD direction, the structure of simultaneous translation and the lightning system, employing a staff of 15 people full time for seven days.

In front of the audience of two thousand people, the monumental artwork has been launched with the presence of the Prime Minister Matteo Renzi, the mayor Virginia Raggi, the ex mayors Francesco Rutelli and Walter Veltroni, the President of CONI Giovanni Malagò, of AD of Eur Spa Enrico Pazzali and the President of Eur Spa Roberto Diacetti.

Tecnoconference Europe – Gruppo Del Fio is one of the major supplier of technological services and products for events in central Italy. Beyond the audiovisual systems and structures, it can supply  complete services from a creative project, to a concept development, to a projection of the scenic design, to the technical development.

(The mayor of Rome Virginia Raggi and the Prime Minister Matteo Renzi on the stage of the inaugural ceremony of the Roma Convention Centre. Cover: the scenographic illumination of Nuvola by night)