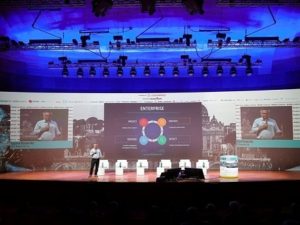 A yearly appointment for the Roman company specialized in technology for high-level events.

Once again, Tecnoconference Europe–Gruppo Del Fio supplied all technologies at Cybertech Europe, the most important conference-exhibition in Europe and in the world – after the US one – dedicated to cyber security technologies.

Cybertech 2018 took place at the Nuvola convention center in Rome. It brought together leading corporations, small and medium-sized enterprises, start-ups, private and corporate investors, venture capital investment firms, experts and clients: over 4000 participants from 40+ countries, 120 companies and start-ups, more than 130 speakers, government delegations and hundreds of industry leaders per day.

In a large exhibition space dedicated to multinational corporations and SMEs, and in the ‘Cybertech Start-Up’ global pavilion, young scientists and start-ups showed off their latest inventions and technologies.
The opening day was attended by Italian Defense Minister Elisabetta Trenta and by Leonardo’s CEO Alessandro Profumo.

In the 2,000-seat auditorium, a large curved screen filled the stage with lighting effects and video projection in blending, while numerous feeds – such as live images, graphic contributions and ppts – simultaneously ran thanks to an advanced graphic mixing system.
A perfect sound was guaranteed by an amplification system integrated with the latest generation line arrays. The lighting technique included multiple Gobos that created a polymorphic atmosphere.

The 300-seat plenary hall was connected to the press room and the Forum via a fiber optic system. A simultaneous Italian-English translation was also available, and monitors were provided at every stand in the vast exhibition area.

Tecnoconference Europe – Gruppo Del Fio is one of the major suppliers of technological products for events in Central Italy. Besides audio-visual systems and equipment, they provide a complete and thorough service: from a creative project idea to the idea development, to the set design planning, to the technical production.