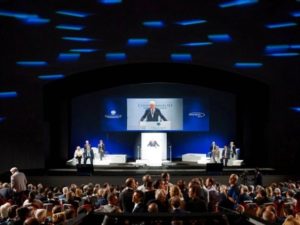 Tecnoconference Europe’s technology at the Confcommercio General Assembly in Rome.

Once again, Tecnoconference Europe – Gruppo Del Fio, the official partner of Confcommercio, supplied all technologies for the General Assembly that took place on June 7 in Rome.

The opening speech was given by President Carlo Sangalli. The General Assembly saw the participation of some of Italy’s newest Ministers, such as Luigi Di Maio (Economic Development, Labour and Social Policies) and Giovanni Tria (Economy and Finances).

The technological equipment supplied by Tecnoconference Europe – Gruppo del Fio included a large screen on which live images and picture-in-picture graphics were projected thanks to a full HD multi-camera system. The press room was remotely connected to the Auditorium via CCTV.
Tecnoconference Europe also provided digital badges, 15 on-site accreditation stations and laser readers.