A/V services for 2500 participants at the General Assembly of Confindustria in Rome.

Every year the General Assembly of Confindustria is a very important event for the number of participants and the prestigious level of the guests.

All the technological and audio-video services of 2017 event have been provided by Tecnoconference Europe–Gruppo Del Fio who also coordinated the direction.

Many important politicians participated such as the Chamber President Laura boldrini, the Undersecretary of the Council Presidency Maria Elena Boschi and the Minister for the Economic Development Carlo Calenda, who also spoke after the report of the President Vincenzo Boccia. 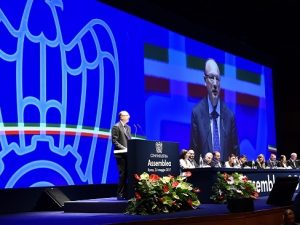 The setting project decided to mainly emphasize the tecnological element in the scenography, putting a big screen in rear projection of 14 x 5 meters behind the presidency and the stage. A very spectacular and unusual effect for institutional assemblies.
The video Direction used  full HD cameras broadcast in studio version, while the emission direction worked with sophisticated digital graphic mixers for the contributes that skimmed on the screen.

A closed circuit monitor system at the Press Area allowed to more than 100 journalists follow the works in the room and provided the audio and video broadcast signals to many radio and tv networks. A infra red digital system of the latest generation for the simultaneous translation.

Tecnoconference Europe – Gruppo Del Fio is one of the major technological service and products suppliers for events in Central Italy. Besides audio visual systems and machineries, it is able to provide a complete service from the creative project, to the concept development, scenography design, technical development.