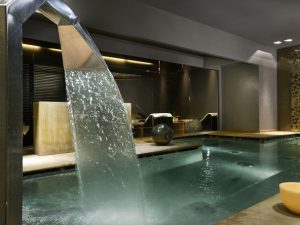 The of Royal Hotel Sanremo SPA has been awarded in the contest ‘Italian SPA Awards’ category ‘Destination SPA’ proclaimed in Milan during BIT 2017.

The contest, organized by the magazine “AreaWellness”, acknowledges the judgement and the vote of the clients that expressed their appreciation for the SPA considered as the best bearer of excellences. The Royal Wellness is a refined and sensual oasis inside the Royal Hotel Sanremo, the five star hotel luxury in the heart of the Flowers Riviera which this year celebrates 145 years of foundation.

The venue
The Royal Hotel Sanremo is a luxury hotel launched in 1872 and has been managed by the same family for five generations. It is part of the Italian Historical Venues Guide.
Six meeting rooms from 8 to 300 seats with natural light and view in front of the sea or on the 16.000 sqm subtropical park, a few miutes away from the beach and the centre with the Casino and the most prestigious boutiques.