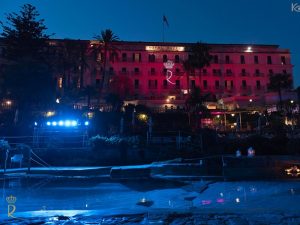 Guests were welcomed by President and CEO of Royal Hotel Sanremo, Ing. Edoardo Varese with cocktails on the terrace followed by a poolside dinner. The event was livened by fascinating aerial acrobatic performances and dancing inside floating spheres.

In this charming location, the band Only Pleasure played 50s dance music, swing, jive and rock’n’roll in a perfect mix between tradition and modernity.

The Royal Hotel Sanremo is a 5-star luxury hotel founded in 1872 and run by the same family for five generations. It’s one of Liguria’s 27 Historical Hotels, as chosen by the “Locali Storici d’Italia” Guide.
It provides six meeting rooms
that can accomodate up to 300 people, all naturally lit and with a 16,000 sm subtropical park or sea view.
The Royal Hotel Sanremo is located just a few minutes from the beach and Sanremo’s city centre, Casino, and prestigious boutiques.