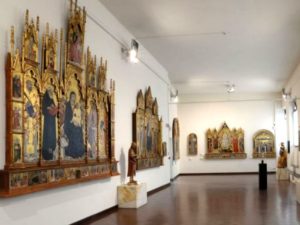 The objective is to add value to museums and archaeological sites: more visits and better use of meeting rooms.

The new directors, 5 Italians and 1 French, have been selected by a commission of the Ministry of Culture in order to manage six important Italian cultural sites: 2 museums and 4 archaeological parks, which often also include a museum.

The Italian Minister of Culture, Dario Franceschini, commented on the new appointments as follows: “Italian museums have changed deeply in recent years and they are recognized worldwide as an excellence. Now the new managers have been selected through rigorous international selections”.

The museums and the new directors:

The National Picture Gallery of Siena, located in the elegant Palazzo Buonsignori and Brigidi, hosts the most important collection of 14th and 15th-century panel paintings of Siena with a gold background, with masterpieces by Duccio di Buoninsegna, Simone Martini, Pietro and Ambrogio Lorenzetti. In 2019 the museum had nearly 10,000 visitors.

Axel Hémery, art historian, director of the Musée des Augustins in Toulouse, was curator of the Pierre-André Benoit Museum in Alès (Gard).

The Museum of Civilizations hosts the collections of the following museums: “Luigi Pigorini” ethnographic prehistoric museum; “Lamberto Loria” museum of popular arts and traditions; “Alessandra Vaccaro” early Middle Ages museum; “Giuseppe Tucci” oriental art museum; Italo-African museum “Ilaria Alpi” (former Colonial Museum). The birth of the Museum of Civilizations is part of the vision of large international museums focused on mankind and its cultures, for the enhancement of heritages and protection of different identities and memories.

The Cerveteri and Tarquinia Archaeological Park, also in Lazio, includes the necropolis of Banditaccia, the largest in the Mediterranean area, inscribed in 2004 by Unesco on the World Heritage List; the National Archaeological Museum of Tarquinia, which is hosted in the ancient Vitelleschi Palace and preserves, among other things, the famous high relief of winged horses from the excavations of the Ara della Regina; the necropolis of Monterozzi. In 2019, these sites recorded a total of over 153,000 visitors.

Vincenzo Bellelli is an internationally renowned archaeologist, research director at the CNR serving at the Institute of Cultural Heritage Sciences, and scientific manager of the archaeological excavations in the urban area of ​​Cerveteri.

The Archaeological Park of Paestum and Velia has been inscribed in the UNESCO world heritage list since 1998, and has territorial jurisdiction over the museum and the archaeological area of ​​Paestum, the narrative Museum of Hera Argiva at the mouth of the Sele river, on the area of ​​the former Cirio establishment, on the surrounding walls and on other archaeological areas of competence. The Park preserves and enhances the archaeological and historical-artistic collections and monuments for a sustainable use of the cultural heritage. The Mediterranean Exchange of Archaeological Tourism also takes place every year in Paestum.

Tiziana D’Angelo is an internationally trained archaeologist (Phd Harvard), expert in the art and archeology of Magna Graecia. She teaches at the University of Nottingham (UK) and obtained her PhD in classical archeology from Harvard University in 2013.

The Sepino Archaeological Park includes the archaeological area of ​​the same name, with the remains of the ancient Roman city built in the Tammaro valley, and the museum of the city and the territory, which in 2019 saw over 27,000 visitors.

Enrico Rinaldi, archaeologist specialized in monuments restoration, has long managed maintenance projects planned in Ostia and Pompeii. Docent at the Southern High School of the University of Naples “Federico II”, he currently works in the Directorate-General of Museums.

The Museum of Digital Art will be based in Milan and will be dedicated to the production and presentation of digital content, playing a strategic role in the contemporary cultural scenario. A scenario that is becoming more and more digitized, connected and globalized, in which the very notion of artwork and public is evolving .

Ilaria Ester Bonacossa, art historian, was curator and director of the contemporary art fair “Artissima” in Turin from 2017 to 2021, director of the Academic Master course in “Contemporary Art Markets” at the Nuova Accademia di Belle Arti in Milan and has directed the Civic Museum of Contemporary Art “Villa Croce” in Genoa from 2012 to 2016. She was curator of the National Pavilion of Iceland at the 55th International Art Exhibition of the Venice Biennale in 2013. She was director of curatorial projects for important Italian artistic foundations.

How did the appointment come about?
An international commission was set up that evaluated 156 candidates, chaired by Stefano Baia Curioni, associate professor of economic history at the “Luigi Bocconi” University of Milan and expert in the field of cultural economics.
The following were members of the commission: Nadia Barrella, associate professor of museology at the University of Campania “Luigi Vanvitelli”; Valérie Huet, professor of ancient history at the University of Western Brittany and the “Jean Bérard” Center; José María Luzón Nogué, Real Academia de Bellas Artes de San Fernando, former director of the Prado Museum; Antonia Pasqua Recchia, former Secretary General of the Ministry of Cultural Heritage.
According to the public selection procedure, the Director General of Museums, Massimo Osanna, chose the six new directors among the ranks of candidates indicated by the Commission for each institution.