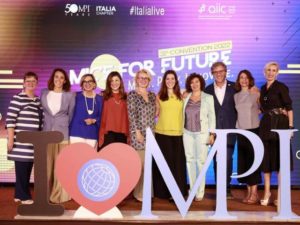 Under the Salento sun, the 31st MPI Italia Chapter convention “Mice for Future” was held in Lecce from July 8th to 10th which brought together the association’s members and the meeting and event professionals to discuss the most current topics in the industry.

During the convention, the Student Award was also conferred which awarded Melanie Arioli, a recent graduate in Economics and Commerce at Ca ‘Foscari University in Venice, with the thesis entitled: “The marketing of the events industry: an analysis of the price determination “.

The topics covered by the speakers helped the participants exchange views about the new challenges and new methodologies that can be applied to the events.

The MPI Italia Chapter convention took place at the Best Western Plus Leone di Messapia in Lecce with the partnership of the Veneto Region with the Venice Region Convention Bureau Network and with the patronage of ENIT Italia, Puglia Promozione and Aeroporti di Puglia.

“#MICEforFuture has given us indescribable feelings and new knowledge that we will certainly cultivate to the fullest. The intertwining of different professional experiences and the skills exchange will be the lifeblood that will nourish our ambitious project: to bring Lecce among the main destinations for MICE.“, said Elisa Sciuscio, Meeting Manager of the Best Western Plus Leone di Messapia.

Federica Mamini, interpreter and representative of AIIC Italia, the International Association of Conference Interpreters who took part in co-organizing the Saturday morning session with international guests, commented as follows: “Conference interpreters and operators in the meeting industry dealt with issues of common interest in order to get to know both realities better and lay the foundations for future collaborations on a global scale “

The next appointment for the national community of meeting professionals is on September 9th in Venice for a new eagerly awaited edition of the Movie Charity Auction as part of the 79th edition of the Venice Film Festival.