From MPI round table a concrete collaboration among Italian MICE protagonists 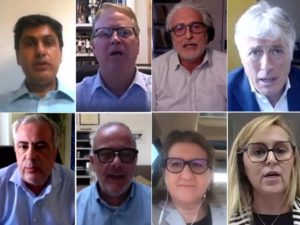 The round table ‘We Have a Dream: from screen to meeting’ organized by MPI Italia Chapter received a rich and various online audience. Planners, venues, hotels representatives, tourism industries, business and event industry representatives, communication agencies, journalists, joined the meeting being interested in listening to the viewpoint of tourism institutions involved in revamping the sector.

After the warm welcome from Enrico Jesu, president of MPI Italia Chapter, and a Paul Van Deventer‘s cameo, President and CEO of MPI Global connected from the United States, all speakers expressed their opinions.

All of them agreed in underlining the need for paying more attention to the tourism industry up to now, also because of its positive impact on the Italian GDP.

A first and partial reassurance came from Enit (to whom the Italian relaunch decree pledged an additional 20 million euros) who said that this year 30% of Enit’s resources dedicated to the promotion will be employed in the MICE sector, also if the conditions have not yet been decided.
A survey among foreign operators revealed also – Enit said – that they would already be willing to plan events in Italy, mainly Germany (63%) and Russia (73%) while the United States and the UK would wait the end of the global emergency (72% and 76% respectively)

The speakers of the MPI round table:
– Franco Gattinoni, tour operator and spokesman for Ripartiamo dall’Italia
– Luca Patané, president of Confturismo-Confcommercio asking for a stronger collaboration from Enit, as industry professionals know better and in a shorter time the needs of the market
– Giovanni Laezza, President of the Italian Exhibitions and Fairs Association (Associazione Esposizioni e Fiere Italia)
– Marina Lalli, President of Federturismo-Confindustria

A good news came from Alessandra Albarelli, President of Federcongressi&eventi and institutional spokesman #Italialive. Lazio Region will be the spokesperson and will arise at the State-Regions Conference on May 29 the request to resume the events starting from June 15. If approved, the document with the guidelines proposed by the tourism associations will be sent to all regional institutions and it will a useful guide to draft the necessary protocol.

The end of the round-table discussion was also a “see you soon” because all the speakers are willing to keep a direct discussion so as to give the tourism and live events sector the relevance it deserves both in terms of turnover and employees.