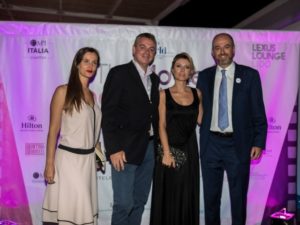 MPI Italia’s charity auction for WeWorld Onlus at the Lexus Lounge in Venice. Over 100 participants.

Once again, during Venice’s International Film Festival, MPI Italia, together with Rome’s All Star Agency, organised the Movie Charity Auction & Party, a charity event in support of WeWorld Onlus, which safeguards women’s rights in Italy and in the world.
Over 100 personalities from the meeting industry participated to the charity auction at the Venice Lido, which managed to raise €3000.

Rita Girotti, WeWorld Onlus’ Director of Communications and Fundraising, highlighted the importance of being able to count on allies like MPI Italia Chapter to support the many women who suffer from all kinds of violence every day.

Euridice Axen, emerging Italian actress starring in Paolo Sorrentino’s ‘Loro’, was one of the guests and testimonials of the soiree. She said: “I’m honoured to attend this 5th Movie Charity Auction & Party in support of WeWorld Onlus, which actively fights against violence on women.”

Mauro Bernardini, GM of All Star Agency and Immediate Past President of MPI Italia, said: “I’m proud of the success of this edition of The Movie Charity, a venture that I had the pleasure of starting and seeing grow over the last 5 years. It has attracted new partners and a growing number of guests and supporters, and I want to thank all of them for their generosity and Lexus for the hospitality.”