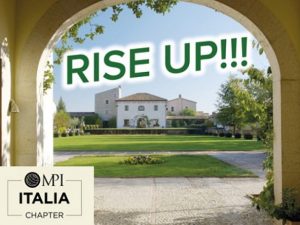 At MPI Italia Convention 2017 the new board and a debate about the planner’s role to promote a destination.

The MPI Italia Convention reached in 2017 its 26th edition. It took place in Umbria, at the Tenuta dei Ciclamini of Giulio Mogol.

During the assembly the new board has been ratified: Elisabetta Caminiti, President Elect, and two new vice presidents: Carolina Santarelli (Communication) and Luca Vernengo (Education). In the team also Jessica Statzu as the responsible ad interim of secretary.

The MPI Italia Convention has been also the opportunity for a special debate about Umbria which, even though it’s the region that was less involved by the earthquake, has been communicated by an alarmist media campaign that originated a decrease of tourists in the territory. Luigi Rossetti, one of the managers of the Regional Office, emphasized the role that the events planner may have and invited the participants to be the mouthpiece of Umbria region by simply telling what they really saw in person. Prposals and discussions guided by Andrea Baldo, coach and trainer, ended the work session.
As a first step, MPI Italia Chapter decided to establish a more concrete relationship with the population  involved in the Umbria earthquake. During the MPI Italia Convention the board gave a check to two associations in Amatrice to finish some works and on Saturday July the 1st they delivered new school bags with notebooks and crayons in Preci to the children of the elementary school.
Mauro Bernardini, president of MPI Italia Chapter, also announced that the proceeds of the next Movie Charity Auction during the Mostra del Cinema in Venice, will be divided between Medicinema and the people in Umbria who was shocked by the earthquake.

Like in every MPI Italia Convention, the program included also a team building activity that was thought appropriately for the meeting venue, the home and the ranch of maestro Giulio Mogol. Divided in teams and under the direction of a vocal coach, the team building consisted in a singing challenge in which the participants registered a song by Mogol-Battisti. A lot of fun, laughter and the pleasure to sing together.

The MPI Convention ended with a visit at Triponzo baths, recently renovated. After that some members participated to a post-tour in Assisi and around. 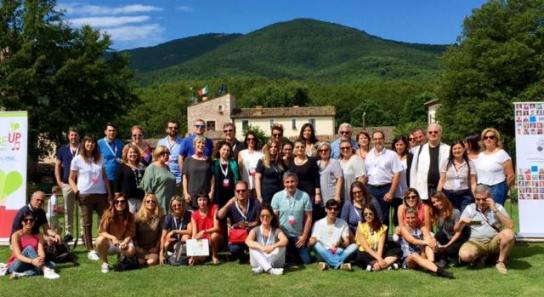 Next events of the Chapter: the Movie Charity Auction during the Cinema Festival in Venice (September) and the Global Forum of SITE and MPI in Rome in January.

Founded in 1991, MPI Italia Chapter is the Italian Chapter of the international association MPI (Meeting Professionals International, founded in Dallas, USA in 1972). The association has now more than 17.000 members divided in 90 Chapters. It represents all the professionals in the the event’s industry: planners, venues  and services suppliers, buyers agencies, intermediary companies, institutions, teachers and students. MPI Italia Chapter has been recognized and registered in the list of the Italian Economic Development Ministry.
MPI Italia Chapter has been the first European Chapter of the association.