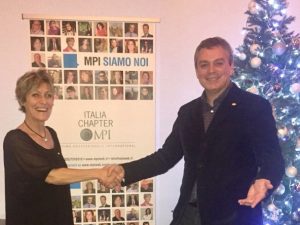 Congratulations to Mauro Bernardini, who will be the new President of MPI Italia Chapter from January 1st 2017 until June 30th 2018.

Giovanna Lucherini, executive director of the Convention Bureau Napoli and MPI’s president since July 2015, delivers the task starting on January 2017 to the elected president Mauro Bernardini, the owner of All Star Agency, and proudly reviews the accomplishment of her presidency. A lot of goals have been achieved, but what is very remarkable is the quality. Here are some of them:
– the organization in Rome of the 1st edition of the GMID (Global Meeting Industry Day)
– the celebration in Naples of the 25th anniversary of the foundation of MPI Italia Chapter
– many associative events of training and networking, also with the experts of other industries
– the launch of the project for the Professional Certificate directed by Rodolfo Musco
– the renewal of the agreement with IBTM for the Hosted Buyer Group MPI Italia
– the renewal of the collaboration agreement with Federcongressi&Eventi and with SITE Italia
– the creation of the MPI Student Committee with a VP in the executive
– the increase of the presence of MPI Italia members at MPI international events (EMEC, WEC)
– the creation and launch of the new website www.mpiweb.it
– and, last but not the least, the balance sheet is positive!

The appointment is on March for the election of the next president elect.
Meanwhile, best wishes to Mauro Bernardini!