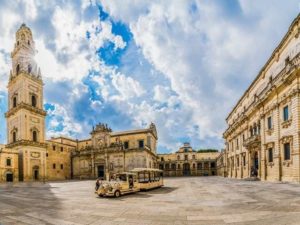 The destination of the 31st MPI Italia Chapter’s Convention has been unveiled: from 8 to 10 July 2022 all professionals in Lecce!

Applications had been opened in November 2021 and on February 15th 2022 MPI officially announced that Puglia will host the 31st Annual Convention of MPI Italia Chapter (Meeting Professionals International) which will take place from 8 to 10 July 2022.

The BW Plus Leone di Messapia Hotel&Conference in Lecce is located in one of the most fascinating areas of the Apulian Baroque, and picks up the baton after the success of the previous conventions in Turin in 2021, in Rome and in Treviso.

The location has been announced online at the end of a networking meeting organized by MPI Italia Chapter to give voice to the members.
During the virtual session,before knowing the destination, Instant Polls were launched and 57% of members expressed their desire to move to Southern Italy for the next annual convention. It has been a double confirmation of the great appreciation that the Apulian destination will gather from the community of the Italian meeting & tourism industry’s professionals.

Sustainability, Leadership, Metaverse, Microsoft Mesh, Holograms, Culture, Ethics, Design are the topics voted by the members as hot topics. In the upcoming weeks, the board of the Italian Chapter will develop them to define the program of the Convention in collaboration with the local organizing committee.

Lecce will also host a board retreat with the board of directors of MPI Italia Chapter to work on the event planning, starting with the enhancement of the local MICE supply chain.

Luca Vernengo, President of MPI Italia Chapter 2021-2022, comments: “After 5 years, we are thrilled to return to Southern Italy, to Lecce, the cradle of the Apulian Baroque, and that the choice marries the preferences of the members. We thank in particular the Best Western Plus Leone di Messapia for the passion it handled its application along with the partners and public institutions of the area. We will work on a memorable program ”.

Even the President Elect MPI Italia Chapter, Giuseppina Cardinale, enthusiastically adds: “We look forward to bringing our 31st Convention to a magical region like Puglia, a destination that has so much to offer to us, professionals of the Meeting & Event Industry. Having the support of valuable members and partners, we can already have a precise and strong idea of what this convention will be: an unmissable appointment for everyone”.

The Association
Founded in 1991, MPI Italia Chapter is the Italian Chapter of the International community MPI (Meeting Professionals International), founded in Dallas, USA, in 1972. The association counts over 17,000 members in 24 countries and 90 chapters.
MPI represents all professionals in the tourism, event and meeting industry.
MPI Italia Chapter was the first European chapter of the association.
Along with Federcongressi it is in charge of the courses and exams for the Meeting and Event Management Certification recognized by Italy.