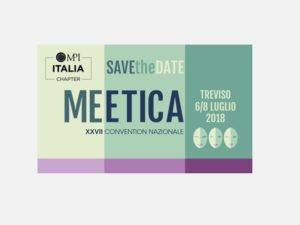 Ethics in the meeting industry will be the theme of the 27th MPI Italia Chapter Convention, named “Meetica” and organised in partnership with Marca Treviso Convention Bureau. The program includes training workshops, social moments in unconventional venues, networking, and the opportunity to discover the city of Treviso and its surroundings thanks to the many team-building activities.

The MPI convention will be held at Best Western Premier BHR  Treviso Hotel, the modern 4-star Superior hotel with the most important and largest congress center in Treviso, a few kilometers away from the city center.

For the first time ever, the Hosted Buyer Program, that allows B2B debates between MICE professionals.
A special guest is also in attendance: Julius Solaris, editor of Event Manager Blog, founder of the Event Planning & Event Management – the 1st Group for Event Professionals Linkedin group, and organiser of Event Innovation Lab, free training event that was held in Los Angeles in April.
(editor’s note: thanks to an agreement with EventMB, some articles are translated and published on ItaliaConvention)

See the program and come to Treviso!  >>>