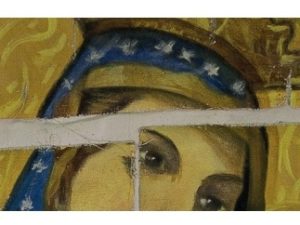 From March 16 until April 7, the art of Matti al-Kanun tells a story of war and hope.

Once again, the Island of San Servolo hosts a powerful exhibition, with a moving backstory and symbolism: Back to Life in Iraq, by Christian Iraqi painter Matti al-Kanun.

The history of the exhibition
In 2014, when Isis entered his hometown of Bartella, al-Kanun fled Northern Iraq, leaving all his paintings, often inspired to the Italian Renaissance and Christian themes, behind. Upon returning to Bartella after the city’s liberation, al-Kanun decided to restore his paintings, destroyed by the jihadists, but keep the “scars” on the canvases. To reject Isis’ violence, and hope for a new and better life for Iraq.

Back to Life in Iraq was discovered and brought to Venice by journalist Emanuele Confortin, author of the photographs and the documentary that accompany the exhibition.

Opening times
Every day from March 16 until April 7, from 9 am until 7 pm. Free entry.

Back to Life in Iraq officially opens on March 16 at 3 pm. Matti al-Kanun, Emanuele Confortin and others will be in San Servolo to explain the history of the exhibition and the restoration process, and discuss issues such as human rights and the persecution of Christians in the Middle East.

The venue:
San Servolo Conference Centre is located on an island in the Venetian Lagoon, formerly used as a monastery. It has 11 meeting rooms that can seat 15-240 people and 173 guest rooms. The island is also home to the VIU-Venice International University and permanently hosts some works of art.