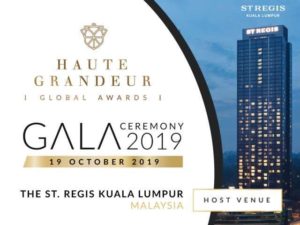 At the Haute Grandeur awards ceremony on October 19 in Kuala Lumpur, the Kolbe Hotel Rome rose to the podium 5 times.

On October 19, 2019, the Haute Grandeur award ceremony was held in Kuala Lumpur and it represented an evening of great satisfaction for the Kolbe Hotel Rome and for all its staff.

And a special award also was given to the director of the Kolbe, Carlo Izzo, as his experience and his management have been able to bring the hotel services to excellence. Carlo Izzo received the excellence award as ‘Best General Manager in Europe‘.

Thus the list of prizes of the 4-star Kolbe Hotel Rome and Unique at the Palatino Garden Restaurant gets longer and gives many reasons more to choose it to planners looking for a meeting venue in Rome: 4-stars excellent service, 19 meeting rooms, all with natural light, wonderful view.
The hotel has also recently installed an electric car recharging station and has set itself the goal of increasing the sustainability of the structure by eliminating plastic.

Awards won in the last years:

Kolbe Hotel Rome and Unique Al Palatino Garden Restaurant
Kolbe Hotel Rome, a 4-star hotel located in the historic center of Rome, has 19 meeting rooms with natural light. The Unique Al Palatino Garden Restaurant is located in the oldest part of the building, and offers, as well as recipes of traditional Italian cuisine, vegan and gluten-free menus.

Haute Grandeur
“Haute Grandeur Global Awards – says Marinique de Wet, founder and president of Haute Grandeur – raises the standards of excellence in hospitality at a global level, inspiring the structures to overcome past results. Even if the winners have reached the pinnacle of success, their most difficult challenge is still to be faced – because achieving success is difficult, but remaining successful is even more difficult. That is why we must set ambitious goals and continue to push our limits “- and continues -” The winners are chosen through guests feedback so the results are guaranteed through a fair and transparent process. This is the Haute Grandeur method that sets us apart in the world of rankings and awards “.