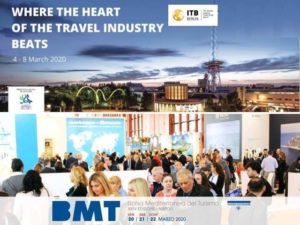 Another very excellent victim. Berlin ITB, scheduled from 4 to 8 March, has been canceled. And BMT in Naples postponed.

A few days from the opening, the Coronavirus-19 threat has also compromised Berlin and the planners have decided to cancel the event.
With over 10,000 exhibitors coming from 180 countries, ITB Berlin is one of the most important international events for the tourism industry.

Christian Goeke, chairman of the managing board, said: “We feel responsible for the safety and health of our guests, exhibitors and visitors, and all those who work for us at this great fair. Hence, regretfully, we have decided to cancel ITB Berlin 2020 ″
The dates for next year’s edition have already been announced: from 10 to 14 March 2021

BMT, the Mediterranean Tourism Exchange has only been rescheduled. First scheduled from 20 to 22 March, it has been delayed from 8 to 10 May 2020 in Naples.

Abroad other important fairs have been canceled just a few days from the opening:
– the International Motor Show in Geneva, scheduled for the media from 2 March and 5 to 15 March for the public.
– Paris Book Fair, scheduled for March 20-23. The government’s decision to ban indoor gatherings with more than 5,000 people – said Vincent Montagne, president of the event – just made the realization of the event unquestionable.

In Italy:
– the International Journalism Festival in Perugia, scheduled at the beginning of April, has been canceled. At the festival were expected 600 speakers from 52 different countries, volunteers from 21 countries and over 300 events scheduled
– The International Furniture Fair (Salone del Mobile) in Milan, scheduled from 21 to 26 April, has been rescheduled from 16 to 21 June 2020
– Vinitaly, the 54th edition of the most important fair dedicated to Italian wine, taking place in Verona,  has been postponed from April to June, from June 14th to 17th, 2020