The Italy-Iran business forum at Parco dei Principi in Rome 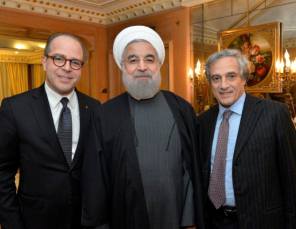 The famous hotel Parco dei Principi of Rome has been chosen as location for the revival of economic relations between Iran and Europe, confirming its role as a prestigious setting for important international events.

The meeting, scheduled for Tuesday, January 26, is organized by Confindustria and the Italian Trade Agency, in collaboration with the Embassy of Iran in Italy. It aims to be a springboard for the creation and consolidation of partnerships and investment for growth and development.
Speakers will include the President of the Islamic Republic of Iran Hassan Rouhani, the President of Confindustria, Giorgio Squinzi and many other prominent figures, including Farhad Sharif, representative of the Iranian Chamber of Commerce and Riccardo Monti, president of Italian Trade Agency.

Wednesday, January 27, once again at Parco dei Principi, the Iranian President Rouhani will hold a press conference. It will be the final stage of the Italian tour of the President, who a few hours later will leave for Paris.

The Hotel:
Parco dei Principi Grand Hotel & SPA is situated at just 15 minutes of walk from Piazza di Spagna, the Trevi Fountain, Via Veneto and Via Condotti. The Conference Center displays 18 meeting rooms, the Fernandes Conference Room can host up to 900 delegates, theatre style. The expansive spaces in front of the meeting rooms allow to organize coffee breaks and lunches buffet. The space by the outdoor pool is a perfect location for cocktails.