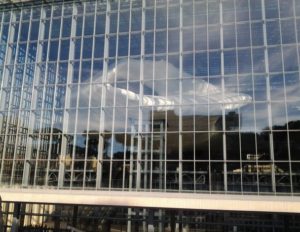 The opening ceremony for the new Rome-Eur Convention Center on Saturday October 29th.

After 18 years of work, the “Cloud”, the large convention center designed by architect Massimiliano Fuksas, has been presented to the public.

Entrepreneurs and event organizers from all over the world were invited to participate in the opening ceremony taking place in the 1,800-seat auditorium, the so-called “Cloud”. A white, puffy structure that seems to be floating inside the glass and iron building of the new Convention Center (the “case”).
Cesare Bocci (best known for his performance as Mimì in the television series “Il Commissario Montalbano”) hosted the ceremony, which was aired live by RAI.
Roberto Diacetti, President of EUR Spa, explained that the “Cloud” can attract high-profile meetings and allow Rome to host important international events.
Architect Massimiliano Fuksas, who attended the event with his wife and studio partner Doriana Mandrelli, said that he was happy to see his project finally realized after 18 years of work.
Duccio Astaldi, President of Condotte Spa, the construction company, has declared himself proud of this majestic creation.

The importance of the event has been underlined by the participation of Prime Minister Matteo Renzi and Mayor of Rome Virginia Raggi who gave the Convention Center their best wishes for a bright future in the meeting industry.
Major Raggi has also underlined that after so many years and so much public money spent on this project, it is to be hoped that the “Cloud” will have a successful but also a more transparent future.
Dancer Desmond Richardson and cellist Mario Brunello performed between the speeches of the authorities. Choreographer Daniel Ezralow has entertained the audience with an aerial performance created for this occasion.

The gala dinner after the ceremony has been organized by Palombini Ricevimenti, while the lighting and the technological equipment have been provided by Tecnoconference Europe-Gruppo del Fio.

The guests were accommodated in nearby hotels, in particular in Sheraton Roma Hotel & Conference Center, located in the EUR district just a few minutes away from the conference center.

The final cost of the work is yet unknown, but it is definitely high. According to Massimiliano Fuksas, 239 Million Euros have been spent on the project (in line with estimates), 353 Million Euros for Eur Spa, while the Under Secretary of the Treasury Paola De Micheli presented a provisional estimate of 467 Million Euros (source: Il Sole 24Ore). Eur Spa, owner of the center, had to sell four prestigious buildings to pay its debts: Central Archives of the State, Pigorini Museum, the Museum of Art and Popular Traditions and the Early Middle Ages Museum. The Ministry of Economy and Finance owns 90% of Eur Spa, The Municipality of Rome owns the remaining 10%. According to Il Giornale, Rai live broadcast, used as a showcase for the event, has cost about 1 Million Euros.

(Photos: under the Cloud; the crowd entering the Auditorium; gala dinner tables)