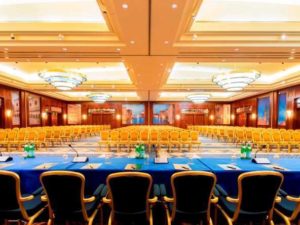 World Travel Awards was established in 1993 and, every year, an international jury of experts in tourism and hospitality industry celebrates the best hotels in the world.

Since 2013, the hotel has been awarded at World Travel Awards gala ceremony as Italy’s and Europe’s Leading Conference Hotel.

Voting for the Awards 2019 is underway up to April the 28th, 2019.
If you have organized your meeting at Hilton Molino Stucky, or have just participated and want to support its nominee for World Travel Awards 2019, click here to vote!

Hilton Molino Stucky Venice is the largest hotel with a convention centre in the Venice Lagoon. With its 379 rooms and 14 meeting rooms and a ballroom that can accommodate up to 1,000 people.