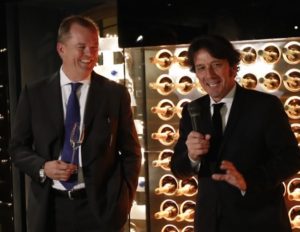 The agreement between the 5 star hotel in Venice and Prosecco DOC establishes a rotational presence both in the wine list and in stock of at least 20 labels of Prosecco wine. The wines will be selected by the Prosecco Consortium and approved by a panel of Hilton Molino Stucky.
The wine bottles will finally be exhibited in two hi-tech cells in the restaurant Aromi at Molino Stucky with a dedicated wine list. The wine will also be served in glasses personalized by the Prosecco logo.

The partnership was signed by Ilio Rodoni, new general manager of the Venetian hotel, and the president of Prosecco Consortium, Stefano Zanette.
President Zanette commented the initiative emphasizing the goal to enhance the value of Prosecco wine.
Ilio Rodoni thanked his predecessor Cabella for laying the foundations of this collaboration and expressed his satisfaction for the partnership, which gives the opportunity to strengthen the bond between the Hotel and the excellent products of the territory.

Hilton Molino Stucky Venice is the largest hotel in the lagoon for meetings and congresses. The hotel is just five minutes boat-ride from Piazza San Marco and 30 minutes from Venice airport.