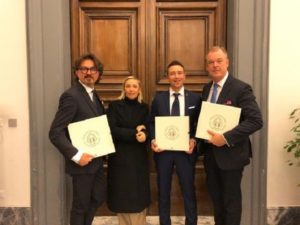 Hilton Molino Stucky, the award-winning hotel in the Venetian lagoon, was awarded the 100 Italian Excellence Award in the Hotel category

The 100 Italian Excellence Award ceremony was held on December 5th, 2019 at Protomoteca Hall in the Italian Parliament in Rome.
The 100 Italian Excellence Award, reaching its fifth edition in 2019, was assigned for the Hotel category to Hilton Molino Stucky Venice, defined as a modern Venetian masterpiece. A prestigious recognition that celebrates the valuable contribution of 100 individuals and entrepreneurial realities to the growth of our country and the enhancement of a distinctive brand recognized all over the world. Through the history of 100 Italian Excellencies, the face of beautiful Italy is thus represented.

The award assigned to Hilton Molino Stucky Venice was collected by Ilio Rodoni, the general manager of the hotel, who so commented the the award: “This new award crowns an amazing 2019, during which Hilton Molino Stucky has obtained several international awards. The 100 Italian Excellence Award, in particular, makes us very proud because it highlights the contribution given to the country, starting from the local reality we are in and our commitment for the quality tourism enhancement in an iconic destination worldwide, such as it is Venice. A success that cannot be ignored by Hilton Molino Stucky team, a true excellence, which every day is committed to ensuring a wonderful stay experience to each guest “.

The hotel is located on the shores of Giudecca Island in the historic building of a perfectly restored flour mill. It hosts conventions, conferences, meetings and presentations all year long and, apart from the large and modern convention facilities, it is a magical and charming venue also thanks to the terrace overlooking Giudecca Canal and the renowned Skyline Rooftop Bar.

The venue
Hilton Molino Stucky Venice, with its 379 rooms and suites, is the largest hotel with a convention centre in the Venice Lagoon. Its 8 bars and restaurants, the second largest SPA in the city, and its rooftop pool, which offers one of the best views in Venice, make the hotel the perfect venue to meet all kinds of needs