Exhibitions and concerts at Grand Hotel Villa Serbelloni in Bellagio 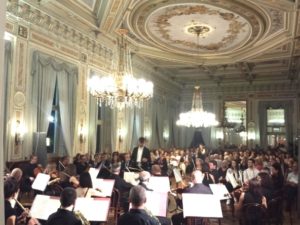 In the summer, the luxury hotel in Bellagio opens its doors to art and music.

From July 3 until July 15, the Sala Breva, on the ground floor of the hotel, hosts the exhibition “Light is revelation” by sculptor Franca Franchi, showcasing bright sculptures and jewels that refer to the artist’s Zen poetics.

From August 14 until August 19, the artworks of Viterbo painter Michele Telari will be on display at the hotel: pencil, pastels, watercolours, acrylics, oils…

As usual, the event season at the Grand Hotel Villa Serbelloni will end with the gala dinner of the Trofeo Vele d’Epoca e Classiche (the Lake Como Vintage Sails Trophy, sponsored by the Grand Hotel since its first edition, back in 2002), which will take place from September 21 to September 23 in Pescallo.