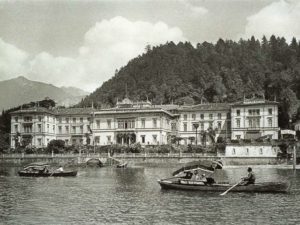 In 1918, at the end of World War I, Swiss businessman Arturo Bucher bought a nice, elegant hotel in one of Italy’s most charming spots: Bellagio, medieval village on the tip of the promontory that separates the two branches of Lake Como.

And so began the story of the Bucher family at Grand Hotel Villa Serbelloni, considered one of the most prestigious and fascinating hotels in the world.
In 100 years, three generations have managed the hotel: Arturo, Rudy, and current owner Gianfranco Bucher.

The three managements have preserved the atmosphere of the elegant 19th-century mansion, that over the years has enchanted royals and heads of state, celebrities and actors, scientists and artists.
From the Royals of Albania to Queen Victoria of Spain, Queen Maria of Romania, Grand Duchess Catherine of Russia, Lady Chamberlain, the Queen of Sweden, the Royal Family of Luxembourg, the Sheikh of Kuwait, King Faruk of Egypt, the Rothschilds, Winston Churchill, and many others.
Two American presidents, Franklin D. Roosevelt and John F. Kennedy, stayed at the Grand Hotel in 1929 and 1963 respectively. 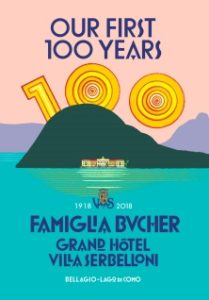 A 1920-style logo will be the official signature of this 100th year of the Buchers in Bellagio. For the occasion, the restaurants’ menu also includes “vintage” dishes such as Parisian gnocchi and pressed duck.

The venue
Grand Hotel Villa Serbelloni is a 19th-century villa located on the promontory of Lake Como. The hotel has several meeting rooms, from the small salon to the large 250-sqm Royal Hall. Its Mistral Restaurant is Michelin-starred.
Special offers for meetings in October.