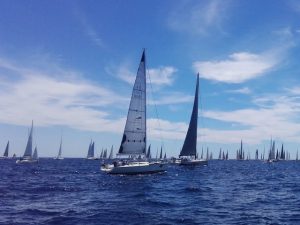 The starting point from Sanremo on the sunset with fireworks. An incredible show that people can enjoy from the Royal Hotel Sanremo.

The 65th edition of the Giraglia Rolex Cup. The regatta “Queen of the Mediterranean Sea” is held from from June 9th to 17th.
Two approaching regattas start at the same time on Friday June 9th from Sanremo and from Marseilles and meet at Saint-Tropez where the most famous off-shore regatta in the Mediterranean Sea will begin: 234 nautical miles from Sain-Tropez to Genoa, turning around the cliff of the Giraglia, the top point of Corsica.

The Giraglia Rolex Cup, which this year celebrates its 65th anniversary, is organized by the Italian Yach Club of Genoa, in partnership with Société Nautique de Saint-Tropez, Yacht Club de France, Yacht Club Sanremo and the Cercle Nautique et Touristique du Lacydon.
The first Giraglia Cup was held in 1953 and only 22 boats participated, nowadays there are 230 registered boats, coming from all over Europe, Russia, Usa, New Zeland and also from Hong Kong.
After the two approaching regattas and the three coast regattas in the area of Saint-Tropez, on Wednesday June 14th the off-shore regatta of 243 miles with the arrival in Genoa in the small harbour Duca degli Abruzzi.
The award ceremony on Saturday June 17th at the Italian Yacht Club headquarters.

The starting point in Sanremo (Friday June 9th) is an incredible event for the numerous sailingboat at the sea on sunset and for the fireworks show that will precede the race. Guests of Royal Hotel Sanremo are used to enjoy it from the terrace of the hotel which dominates the bay.

The venue
The Royal Hotel Sanremo is a luxury 5 stars hotel inaugurated in 1872 and managed by the same family for five generations. It is part of the Italian Historical Places Guide è. Six meeting rooms from 8 to 300 seats with natural light and view on the sea and on the subtropical park of 16.000 sqm, close to the beach and from the city centre with the Casinò and the most presigious boutiques.