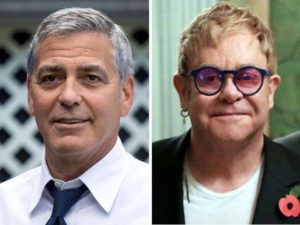 The news that since April was issued a law stating stoning punishment for adultery and gay sex has provoked criticism all over the world including that of the UN High Commissioner for Human Rights, Michelle Bachelet.

But the news that caused a stir is the boycott announced by George Clooney and immediately joined by Elton John, who announced that they will no longer be staying in the Dorchester Collection facilities owned by the Brunei Investment Agency, an agency directly linked to the government of Sultanate of Brunei.

George Clooney wrote a letter about Deadline Hollywood saying he had stayed in many of these hotels in the past, but he will no longer: ”  Every single time we stay at or take meetings at or dine at any of these nine hotels we are putting money directly into the pockets of men who choose to stone and whip to death their own citizens for being gay or accused of adultery”.

Elton John joined the call on Twitter congratulating Clooney and sending his thoughts to all the gay employees in the Sultan’s facilities, joins Dorchester Collection boycott and invites all his friends to do so.

A representative of the Brunei Investment Agency replied through Fox News explaining that company policies are against all forms of discrimination. But this does not affect the legal murder of gays and adulterers in the Sultanate that gave rise to George Clooney’s and Elton John’s protest.