Discovering the flavours of Trentino at Hotel Cristal Palace 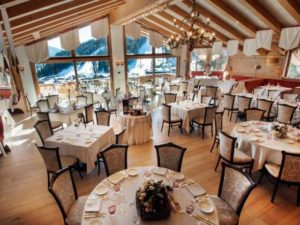 Hotel Cristal Palace, 4-star hotel a few steps from Madonna di Campiglio city centre, offers guest the chance to taste the typical Trentino cuisine. The hotel is open from December to Mid April and from June to End September.

Both menus offer the most typical and famous dishes of the territory such as the luganega sausage, carne salada, spätzle and knödel but some are real surprises of the local cuisine.

An excellent opportunity for planners who want to give their event an extra flavour and offer participants a dinner to discover the traditional cuisine of Trentino.

The Venue
Hotel Cristal Palace, 4-star Superior hotel in Brenta Dolomites, a few steps away from Madonna di Campiglio city centre and its ski slopes. It has 60 rooms and 2 suites, 2 meeting rooms hosting 40 and 80 people, 2 restaurants and a SPA. Indoor and outdoor Team building activities and networking.