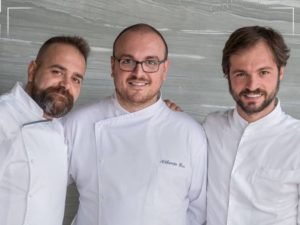 A new team of restaurant professionals, both in the kitchen and in the dining room is opening the 2019 season at Boscareto Resort.

La Rei Restaurant is a great opportunity for guests to discover new culinary proposals and to be enthralled by traditional and innovative menus.

(photo: Fabrizio Tesse on the left)

The venue
Il Boscareto Resort & SPA, 5-star luxury hotel in the heart of the Langhe. 29 rooms, 10 suites, 2 meeting rooms that can accommodate up to 190 people.
La Rei Restaurant can seat up to 70 guests in the dining room, while in the warmer months can host up to 110 people with the tables set up on the beautiful terrace that overlooks Serralunga and its majestic castle.
The hotel and the restaurant are open from Spring to early January.