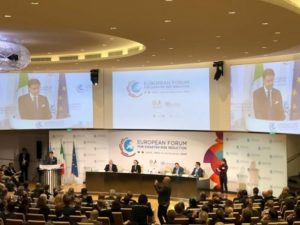 Technology for over a thousand representatives from European countries, international organisations and the United Nations.

Tecnoconference Europe–Gruppo Del Fio supplied all the necessary technologies at the European Forum for Disaster Risk Reduction, one of the most important international events for disaster risk reduction, which took place at the Confindustria Forum in Rome on 21-23 November.
The event was opened by speeches from Prime Minister Giuseppe Conte and UN special representative Mami Mizutori. Agostino Miozzo, chief of the Civil Protection Department, was the moderator.

Tecnoconference Europe–Gruppo Del Fio filmed the 3-day convention with a three-camera full HD video direction (one of which entirely dedicated to a sign interpreter) and a radio-camera, as well as supporting each speech with numerous graphic contributions. A videoconference link with Boston allowed the participation of one of the world’s leading experts on the subject.

The event was streamed live in multiplayer mode for all the interpreted languages on the Civil Protection Department’s website. Simultaneous translation took place in four languages (English, Italian, French and Russian) for a total of 800 listeners.
Four rooms were connected to the plenary session in CCTV with a fiber-optic system.