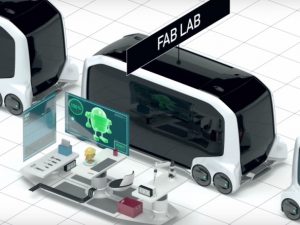 E-Palette was unveiled at CES in Las Vegas by CEO Akio Toyota.

Toyota has stated its will to strengthen its presence on the mobility market by providing not only cars and commercial vehicles, but more and more services as well – competing with technology brands such as Apple, Google and Facebook rather than automotive manufacturers.

E-Palette, an electric, motorized, self-driving minivan specifically thought for businesses, is the first result of this new tendency.  It’s a modular vehicle that can easily be tailored to various needs: it can become an on-the-road e-commerce kiosk, an automated delivery vehicle, or a self-driving cab.
It’s aimed at both large logistics companies and small entrepreneurs from different fields.

The van’s sides will be covered with large screens displaying information about stops, available services, advertisements, etc.
Toyota has also already announced a partnership with Amazon.

Discover E-Palette in this video: