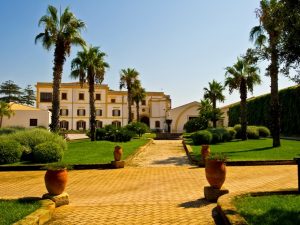 The charming Cantine Florio and the new Cantine di Casteldaccia will be in Milan for BIT – International Travel Exhibition.

On 11-13 February 2018, the historical Cantine Florio, charming venue with 6 meeting rooms and large outdoor spaces in Marsala (Sicily), will be at Fiera Milano City in Milan – Stand D04, Pavillion 3 – for BIT, the International Travel Exhibition.
The winery can be visited, as well as used for gala dinners, exhibitions and tastings.

At BIT 2018, Duca di Salaparuta will also officially present the new Cantine Duca di Salaparuta in Casteldaccia, near Bagheria, in the Province of Palermo. After undergoing major renovation, which added modern design elements to its historical spaces, the Winery was opened to the public in October 2017. It has 3 rooms for meetings, events and tastings.

The venues:
Built in 1833, Cantine Florio is part of the circuit of Marsala’s and Sicily’s excellence, and welcomes every year thousands of visitors from all around the world. Cantine Florio has 6 meeting rooms (3 of which connected) that can host up to 350 people, 300 for the buffet and 500 standing. The wonderful Mediterranean garden can host up to 1,500 people.

The modern Cantine Duca di Salaparuta in Casteldaccia has 3 rooms for meetings and events for up to 150 people. The renowned Corvo di Salaparuta wine was created here in 1824.