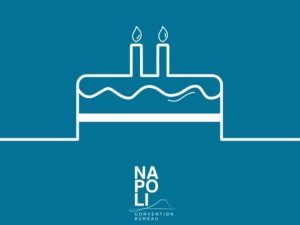 Convention Bureau Napoli turns two years old, with great satisfaction of President Armando Brunini and Director Giovanna Lucherini.
“Naples is consolidating its position as a MICE destination,” says Lucherini. “More and more Italian and international professionals choose our city for their events. Partnership requests have grown by 28% compared to 2016, which shows we are definitely going in the right direction”.

These encouraging figures are the result of an enthusiastic promotional strategy that includes the participation in trade fairs and workshops, and the organisation of fam trips and press tours.
“We have turned Naples into a recognisable destination, chosen by the best meeting planners,” says a satisfied Brunini.

The goal for 2018 is expanding Convention Bureau Napoli’s business network, which today consists of 4 and 5-star hotels, travel agencies, PCOs, catering and equipment companies, as well as important partners such as “unconventional” venues (museums, historic buildings, catacombs…) and convention centres.

“In the last two years – continues Lucherini – we have worked together with Regione Campania and Naples’ Department of Culture and Tourism to participate in trade fairs and organise the Naples General States of Tourism.”
In short, CB Napoli is becoming a major player in the city’s tourism market.

Convention Bureau Napoli (CBN) is a network of private MICE professionals operating in Naples. It was founded in November 2015 to promote and organise events, conventions and fairs in the Naples area.