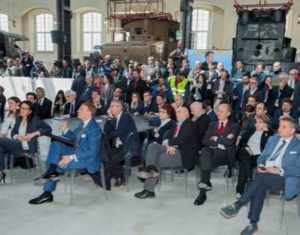 The picturesque Railway Museum of Pietrarsa (Portici – NA) hosted for three days (7,8,9 April) the 2nd edition of the “Stati Generali del Turismo – Visions and Strategies for Tourism Sustainability“: the largest public conference on Italian tourism whose objective is the approval of a National Strategic Tourism Plan in July.
Thanks to a memorandum of understanding with ENIT, the Convention Bureau Italy had identified the Convention Bureau Napoli as an operational partner in the territory. The Convention Bureau Naples and its members have shown strong efficiency and organization. The Convention Bureau Naples was established a few months ago “with the goal of turning Naples into a preferred destination for congresses of national and international importance,” Giovanna Lucherini, CB Naples Director, said.
Among the many distinguished guests at the event, Prime Minister Renzi, Minister of Cultural Heritage and Activities and Tourism (MIBACT) Dario Franceschini, the President of ENIT Evelina Christillin and the representatives of local institutions. The opening day was also attended by the President of the Convention Bureau Naples, Armando Brunini (GESAC) and the Director Giovanna Lucherini.
“We showed a vibrant and ambitious city and top quality companies”, Giovanna Lucherini proudly said. “The city of Naples is ready to welcome large events, conferences and congresses, offering all facilities together with the beauty of a historical town surrounded by a wonderful landscape.”
Even MPI Italia Chapter, the Italian Chapter of the world’s leading association of meeting industry professionals, has chose Naples for its annual convention in late June. This is particularly significant because in 2016 the Chapter celebrates its 25-year anniversary.