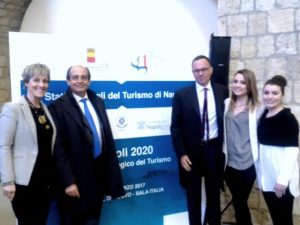 With the participation of Naples’ Mayor Luigi de Magistris and cultural and tourism assessor Nino Daniele in Castel dell’Ovo, the public assembly for the presentation of the Tourism Strategical Plan in Naples took place for the next triennium “Destination Naples 2020”, in which Convention Bureau Napoli, directed by Giovanna Lucherini, participated as an important player.

“We brought the MICE contents at the center of the debate, about the city’s tourism and we’ve been the only the institution representatives on the topic”, thus Giovanna Lucherini, the director of Convention Bureau Napoli, expressed her satisfaction at the margin of the presentation conference of Naples’ Tourism Strategical Plan.

The public assembly was the conclusion of the path of the States General of the Tourism in Naples, started in August 2016 to begin a study about the current situation and to outline an action strategy to qualify the city and locate it among the main European destinations.
It regarded a study path, debate and open hearing of the industry experts to outline the best strategy for Naples’ tourism, take care of it, add value and increase it, assuring to the citizens the best of the sustainability and the most adequate quality and quantity of services.

Moreover around 350 one to one interviews were made to many key characters of the Neapolitan tourism, who contributed to enrich the framework.
The main purpose that emerged from these reflections was to confer to Naples the status of attractive and competitive touristic destination, proposing the city as a touristic destination, that can attract tourists in an autonomous way.
The following purposes were established:
1. Reach 2 million of tourists flow within 2020;
2. Improve the attractivity and competitivity of Naples as a touristic destination;
3. Locate Naples as a destination of urban tourism in the international market;
4. Increase Naples’ notoriety and visibility and create a positive image of the city as a touristic destination;
5. Regularly distribute the touristic flow in the different places of attraction;
6. Participate and involve all the companies and sectors connected to the tourism in the growth process with the collaboration public-private.
All the steps of the path and the main points of the strategical plan are available on the website of Naples Municipality and on the specific blog.

In connection with the promotion of Naples 2020 as a destination for business events, Giovanna Lucherini outlined the on-going initiatives of Convention bureau Napoli: “our purpose is to attract events and conventions also during the months with less touristic flow. We’ll talk about it in March 24 during BMT which is for sure the most important fair in the southern area dedicated to tourism. We organized a focus “Destination management: the incentives for the MICE take-off in the Neapolitan area” in which all of the biggest actors of the congress industry will participate, to show a united face with a solid common aim: relaunch the city as an efficient venue for conventions and congresses”.

Convention Bureau Napoli (CBN) is a network of private operators that represent the excellence of the congress industry in Naples. It was born in November 2015 as a network of companies for the promotion and organization of events, congresses and fairs in the territory of Naples. The director is Giovanna Lucherini.