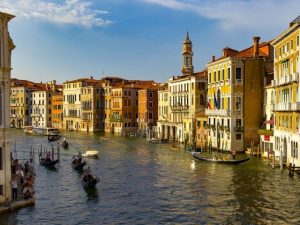 Proceeds will be donated to MediCinema Onlus to build cinemas in hospitals, and to Amatrice’s earthquake victims.

At the Venice Film Festival, once again MPI Italia Chapter  is organizing the MPI Movie Charity Auction, a charity event in support of MediCinema Onlus, an Italian non-profit organization, based on the UK model, that aims to build cinemas in hospitals to aid relief therapy for patients and their families.

The charity auction is taking place on Monday, 4th September from 9pm to 12am in Venice’s historic building Fondaco dei Tedeschi. This year, part of the proceeds will be donated to Amatrice’s earthquake victims. 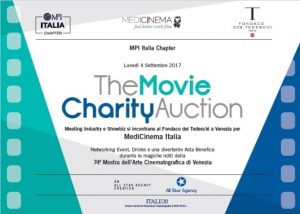 MPI’s Movie Charity Auction is an increasingly stimulating and successful annual event. This year, tickets sold out as soon as the news was published on the organization’s newsletter.

MPI Italia Chapter: founded in 1991, it’s the Italian Chapter of the International community MPI (Meeting Professionals International, founded in Dallas, USA, in 1972), which counts over 17,000 members in 24 countries, and 90 chapters. The association represents every professional in the meeting and event, tourism, and corporate communication industries. MPI Italia Chapter is registered with the Ministry of Economic Development, meaning it can release certifications that are legally valid under Law no.4 of 14th January 2013 (Gazzetta Ufficiale no.22, 26th January 2013), which regulates fields that aren’t already under regulation, to its members.