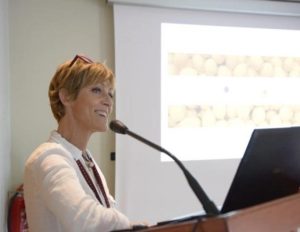 After the successful MPI Convention, an interview with Giovanna Lucherini, Director of Convention Bureau Naples.

It can be said that the debut phase of Convention Bureau Naples is now over. The latest event has been the annual convention of MPI Italia Chapter, celebrating its 25th anniversary in Naples. Giovanna Lucherini, CB Naples Director and MPI Italia President, is behind the success of the event. “It was a challenging experience, but also a rewarding one. The response has been extremely positive from both parts, from the city and the members of MPI. My double role helped me to understand everybody’s needs and to take decisions more quickly. I must add that the city of Naples is going through a very dynamic and positive phase. Tourism in general, not just congress tourism, is constantly growing and the events taking place in the city are attracting cosmopolitan and educated audiences.

The Dolce & Gabbana fashion event is also part of this favorable current climate. Lucherini also underlines the private nature of CB Naples, now gaining the trust of public and semi-public institutions.
“When we asked for help for the MPI event, we got a positive reaction and many non-members took part in the event, too. This means that we have drawn considerable interest”. The MPI event has proved to be a valuable occasion for the city, so no wonder that it has received such a favorable response. And the reaction of MPI has been equally favorable, both on a national and international level.

A participation rate above the average of the last few years, helped by the fact that the Italian Chapter also celebrated its 25th anniversary and that the event took place in a wonderful location: an opportunity not to be missed.
And so it was: 150 participants from all over Italy, non-members included, indicating the interest in the meeting planner profession. And 10 international members, representing the headquarter and the other chapters.
“We had guests from Florida, Texas, Canada, France and the UK. The event had a higher than expected media coverage”.

Convention Bureau Napoli was founded by private partners in November 2015, with the goal of increasing the number of members and partners. Two prestigious partners have already become part of it: Mostra d’Oltremare, the biggest facility in Naples for international meetings; and Città della Scienza, congress center in the old industrial area of Bagnoli.

“This is just the beginning and we are working with limited resources – Giovanna Lucherini concludes – but it is an interesting challenge, with a lot of excitement around it. We can already see the first results. In April we hosted Stati Generali del Turismo and in May we won the competition to host World Tunnel Congress 2019, the most important international conference of tunnel engineers”.