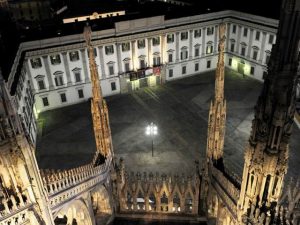 Milan’s exhibition season starts at Palazzo Reale with three unmissable artistic and media events that are the perfect addition to any meeting held in Milan.

Dentro Caravaggio
Possibly the media event of the year, it started on September 29th, Caravaggio’s birth date, and saw over 60,000 advanced reservations made on the very first day – prompting the City Council to extend opening hours until 10:30 pm for four days a week. 20 paintings loaned by some of the most illustrious museums in the world, such as the Uffizi in Florence, the Met in New York City, London’s National Gallery and Naples’ Museum of Capodimonte, are brought together for the first time ever. The exhibit is curated by Rossella Vodret.
Dentro Caravaggio – 29 September 2017 > EXTENDED to February 4th 2018