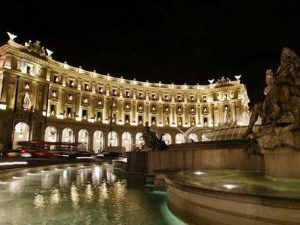 After long negotitations, the US Fund Varde Partners took over all the property of Boscolo hotels chain

It’s been a while that the market was been asking about the destiny of the Boscolo hotels and yet at the beginning of the year the Sole24Ore newspaper supposed that the Varde Fund was the one who would have won the game.
So it was, as different newspapers tell such as MilanoFinanza.it and the same Sole24Ore. The US Fund Varde acquired all the Boscolo hotels after winning a predominant position on Nortwood, Starwood Capital (supported by Prelios), Blackstone and Kildare, by taking over the credit of 310 million acquired by a consortium of 13 banks in relation to chain.

In total the Varde Fund acquires 5.000 rooms and 10 hotels such as the Exedra in Rome, the Dogi in Venice, the Astoria in Florence, the Carlo IV in Prague and the Bellini in Nice.
The Family Boscolo and the four brothers Angelo, Giorgio, Rossano and Romano Boscolo, are definitely out of the management.

The Boscolo history in the luxury industry. Some steps.
In 1978 the Boscolo brothers with the father Bruno, started by buying the first hotel, the “Beau Rivage”, then renamed “Airone”, on the coast of Sottomarina di Chioggia (Venice).
In 1980 Boscolo Tours was rised, a travel agency wanted by Giorgio Boscolo, that then becomes a tour operator. From the mid 80’s the Boscolo focuse especially on the development of the hotel activity, giving life to the brand Boscolo Hotels.
In 1993 the structure is acquired which becomes the Astoria Hotel in Florence.
In 1997 the Grand Hotel Dei Dogi has been inaugurated.
In 2000 the Boscolo started the transformation of two historical buildings into a 5 star hotel hotel: the Exedra, the first Boscolo Luxury Hotel in Rome, inaugurated in 2002, and the Carlo IV in Prague, reopened in 2003 in the elegant center of Prague.
In 2017 end of the family story. A new challenge is now up to Varde Partners Fund