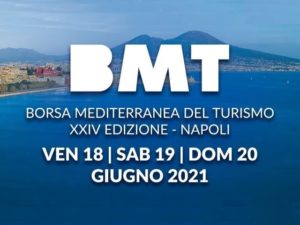 BMT Napoli will be the first live tourist fair in 2021

The 24th edition of BMT, the Mediterranean Tourism Exchange of Naples, initially scheduled for April, has been postponed for two months and will take place from June 18th to 20th 2021.
Minister Garavaglia confirmed his presence at the inauguration as a sign of the importance that the fair assumes this year, considering that it will be the first fair in the presence of 2021.

On the occasion, the Progecta CEO, Angioletto de Negri, explained that: “The postponement of BMT it has been taken after a careful assessment of the progress of the emergency health care and talking with the tour operators. Both the exhibitors who have already confirmed their participation and those who are expressing their interest agreed that the take-off of the vaccine plan should deliver us at that time a clearer and more serene picture of the situation, with the possibility of better planning tourist activities for the upcoming summer.”

BMT 2021 will be organized to ensure maximum safety – ensure Progecta – and the postponement will not involve any changes to the program of conferences, workshops and conferences already planned, but rather several innovations will be announced shortly.

As usual, the Mediterranean Tourism Exchange is reserved for operators and will take place in the Mostra d’Oltremare.