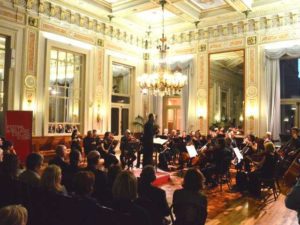 Three concerts until August in the Royal Hall of the Grand Hotel.

This year again Bellagio and Lake Como Festival debuts with a concert hosted in the Royal Hall of Grand Hotel Villa Serbelloni in Bellagio (June 21st), a venue very appropriate to the event both for its sumptuousness and for the acoustic quality.

The Royal Hall is indeed an incredible and luxury space, 6 meters high with huge crystal chandeliers hat illuminating the plasters, gold plating and frescos on the ceiling and walls: 270 sqm and a capacity for about 300 people.
At the Grand Hotel, the manager is very proud as the Royal Hall hosted performances of many well-known musicians, such as the famous pianist Leslie Howard in 2008, considered the best interpreter of Liszt in the world.

Free entrance by donation in favour of Associazione Volontari del Soccorso in Bellagio.

The venue
Grand Hotel Villa Serbelloni, a historical 5-star luxury hotel, stands on the tip of the promontory of Bellagio, the lovely little town called also “the pearl of the lake” in the centre of Lake Como. It offers clients 95 rooms, two restaurants, 3 meeting rooms, one of which is divisible in smaller rooms, a pool, SPA, big garden at the lakeside, private pier. Mistral Restaurant is Michelin starred. La Goletta is open continuously from Noon until 11 pm.