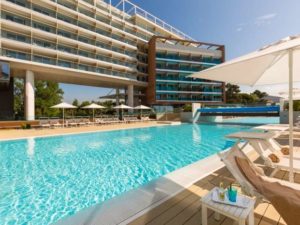 It is Customers’ and Partners’ undisputed appreciation that contributes to Almar Jesolo Resort’s success, being nominated for 5 prestigious and coveted awards in the hospitality world.

After winning the Best New on Luxury Luxury Spa Award, today Almar is a nominee for the third year in a row at the Awards rewarding the excellence of Condé Nast Johansens’ affiliated facilities. Voting is open until 2 September 2019 >>>

Haute Grandeur Hotel Awards
Voting has just ended for this award that rewards the best facilities in the world.

Prime Traveller Awards 2019 (Russia)
Almar Jesolo Resort & SPA is among the finalists of the International competition organized by one of the most important Russian travel magazines (Prime Traveller) along with Prime Concept concierge club, in ‘Best SPA & Wellness Hotel’ category. The winners will be chosen by a jury. >>>

The  venue
Almar Jesolo Resort & Spa is an elegant 5-star hotel overlooking the sea in Lido di Jesolo.
The Auditorium can host up to 530 people and can be divided into a plenary and two galleries, all natural lighted and equipped with advanced technologies. The MICE area has a dedicated Reception and an independent access that makes possible to bring inside cars and large equipments. The hotel is barrier-free and it has a vast garage and outside parking.