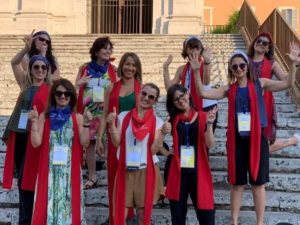 July 5 to 7, three days of training and networking. If every event creates an experience, MPI Italia Convention surely did.

“My Story” was the title and the chosen theme of MPI Italia Chapter 28th Convention that took place in Rome from Friday, July 5th to Sunday, July 7th 2019.
The title was a tribute to Rome, the city of cinema, but the convention also claimed that every event has a story to tell and an experience to live.
This thread was also current in the funny team building activities on Friday afternoon (cover photo) and, especially, on Saturday’s training day where the speakers talked about cinema, communication, stories, meetings and opportunities.

Saturday was opened by several keynote speakers such as Piero Angela, interviewed by Marco Biamonti, who shared his experience as a great communicator. He emphasized that effective communication is also made of metaphors, examples and entertainment, all elements that suggest thoughts and emotions. His story was fascinating and stimulating.

Even the evening before, during the night visit to the Imperial Forums, participants had experienced the effectiveness of Piero Angela’s communication during the audio guide that accompanied the projections on the ruins, letting participant imagine the life of the Forum during its maximum splendour.
The Film Festivals and the cinema as a tourist and event attraction were the main themes of the three speeches during the round table which saw the participation of:
– Antonio Flamini, director of several Film Festivals including Terre di Siena Film Festival
– Judith Abraham, Visit Belfast sales manager, the city where tourists can experience the Titanic Experience or visit the Game of Thrones sets
– Claudio Gubitosi, founder and artistic director of Giffoni Film Festival, the international event dedicated to youngsters’ films this year reaching its 49th edition.

On Saturday afternoon, three seminars:
– the value of collaboration for innovation with Maria Cristina Lavazza of Design Usertestlab and Viviana Neglia of Hua marketers
– the need to grow in order to stay in the market with Rob Budde and Grazia Sapigni of Faculty I-am LAB
– the storytelling of the events with Salvatore Sagone (ADC Group), Giuseppe Carlotti (Fox Networks Group) and Alfredo Accatino (Filmmaster Events)

The training course had an exceptional keynote speaker: the director Pupi Avati, interviewed by Carla Solari,  who recounted his professional career, from the beginning as a jazz musician ousted by a young Lucio Dalla, to the success obtained as a screenwriter and as a director.

An exciting and pathos-filled speech on the meaning of victories and defeats, high motivations and concreteness, realism and dreams…

At the of the day, presentation of the French and Spanish sponsor destinations and, at sunset, a visit to La Nuvola, the new large Roman congress center where some participants arrived by vintage car provided by HR Tours.

On Sunday morning,  team game and ritual photos in a sunny Rome, with tactical stops in some venues of the city such as Casina Valadier, Grand Hotel Palace, Casa del Cinema, Palazzo Merulana, Hard Rock Café, the historic Fassi ice cream parlour. And after lunch, at General Market with the final greetings.

The Convention was also the right occasion to officially introduce the new board leading the Italian Chapter of MPI until 30 June 2020. New President Enrico Jesu.
To know all board members >>>

Enrico Jesu, new MPI Italia president: “The convention had record participation. At the heart of the success obtained, there are the efforts and the professionals willing to get involved for the growth of the Association and the meeting industry. Let’s go home excited and enthusiastic. “.

Onorio Rebecchini, Rome and Lazio Convention Bureau president and sponsor of the event: “We are very proud and honoured that MPI has chosen Rome and a theme like cinema, so related to our territory. Rome was ranked first in Italy by Italian and foreign filmmakers with 1511 films. Every MICE event can breathe in Rome the atmosphere of famous movies, from the historic Roman Holiday and La Dolce Vita, to the most recent La Grande Bellezza ”.

Rodolfo Musco was awarded for 30 years of association in the Chapter and for his commitment in promoting certificates in meeting management. A new session of professional exams in CME-CMS-CMT, curated as always by Musco, took place during the convention.

With a ceremony dedicated to Corporate Social Responsibility, presentation of the best projects selection submitted to the Italian Chapter where participants have selected as the winner the one curated by the FH55 Group in collaboration with ActionAid