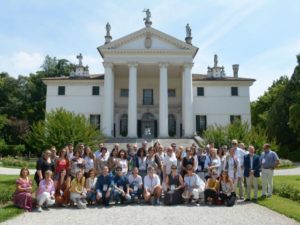 The 3-day convention included the annual MPI Italia meeting and the discovery of Treviso as a business destination.

The Convention found an excellent venue in the form of the Best Western Premier BHR Treviso Hotel, managed by Tiziano Simonato, whose oversight was constant, attentive and considerate.
The destination choice was desired and implemented by Provincial Tourism Promotion Board Marca Treviso and its Convention Bureau, in partnership with the Venice Region Convention Bureau Network, which had the opportunity to present and promote Veneto’s 7 convention bureaus and their vision on cooperation.

A good portion of time was spent exploring the Treviso area and its attractions, thus resulting in the most marked aspect of the entire event.

Indoor, the mesmerizing keynote speech by Julius Solaris, Italian expat in Las Vegas and editor of Event Manager Blog, captured everyone’s attention.
The an hour and a half  keynote, titled “The future of Events. The key trends changing the way we plan events”, was presenting materials and information on the latest global meeting industry trends – first of all the introduction of technology at all event stages, including planning and logistics.

Completely different was the speech given by volleyball world champion Andrea Zorzi, who draw interesting parallels between his experience in sports and event planners’ need for teamworking, separation of duties, and transparent decision making.

In retrospect, the main professional contributions to the job of meeting planning were:
– Julius Solaris’ keynote speech, which offered an interesting overview of how events will be like in the future, and how to prepare for the upcoming changes;
– the discovery of the Treviso area and its many advantages, starting from the proximity to Venice (30 km) and its relatively unexplored event scene. Not to mention the field test of the BHR Treviso Hotel and its 1300-seat convention centre, the largest in Treviso; of the Park Hotel Villa Fiorita, with its mix of modernity and history, and the former Church of San Teonisto, recently opened space in the city centre, which hosted the two evening events.

The atmosphere throughout the event was cheerful, lively and very friendly, both during the convention and on the trips to the Villa Sandi wine estate and the Bessonneau Hangar, with its historical aircraft collection.