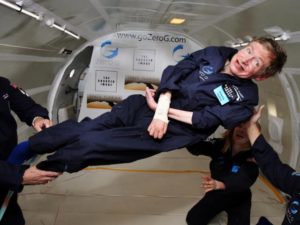 Stephen Hawking, the renowned physicist and cosmologist who recently died of ALS, was not only one of the brightest minds of the last century, but an optimistic man with a great sense of humour and self-irony, too.
Here are 13 of his most brilliant quotes said by Stephen Hawking, useful to remember while living and working:

– Intelligence is the ability to adapt to change.
A Brief History of Time: From the Big Bang to Black Holes – 1988

– Not only does God play dice, but… he sometimes throws them where they cannot be seen.
The Nature of Space and Time – 1996

– The great enemy of knowledge is not ignorance, it is the illusion of knowledge.
Interview – 2001

– People won’t have time for you if you are always angry or complaining.
The Guardian – 2005

– One of the basic rules of the universe is that nothing is perfect. Perfection simply doesn’t exist… without imperfection, neither you nor I would exist.
Into the Universe with Stephen Hawking – Discovery Channel, 2010

– I have noticed even people who claim everything is predestined, and that we can do nothing to change it, look before they cross the road.
Black Holes and Baby Universes and Other Essays – 1993

– The downside of my celebrity is that I cannot go anywhere in the world without being recognized. It is not enough for me to wear dark sunglasses and a wig. The wheelchair gives me away.
Interview with Israeli TV – 2006

– We are just an advanced breed of monkeys on a minor planet of a very average star. But we can understand the Universe. That makes us something very special.
Der Spiegel – 1988

– My goal is simple. It is a complete understanding of the universe, why it is as it is and why it exists at all.
Stephen Hawking’s Universe, by John Boslough – 1985

– People who boast about their IQ are losers.
The New York Times – 2004

– Remember to look up at the stars and not down at your feet. Try to make sense of what you see and wonder about what makes the Universe exist. Be curious. And however difficult life may seem, there is always something you can do and succeed at. It matters that you don’t just give up.