For corporate events every time more involving, emotional (and fun!) there’s a new instrument: the TV, but in a “post-modern” version. It is created with the help of the consumers. The result may seem “bricolage”, but…

1. What’s changed?
The projection of videos during a convention and their use in corporate training is not anything new. What is changed is the relationship we have with the object “video”: today producing one is not a taboo reserved to professionals anymore, and “homemade” videos doesn’t give the shivers anymore.

In just a few years, the television – as a channel for the distribution of videos – has been joined by the internet and all that concerns it: the ever-present youtube, the video-blogs and other websites specialized in the production and diffusion of videos.

Also the official TV has drawn with both hands from the home movie world (ie. the Italian TV program “Paperissima” and so many others). All of this contributed to a change in the way of communicating in the corporate world as well. In this article, I’ll focus on one of this changes: the users’ participation in the phase of production. 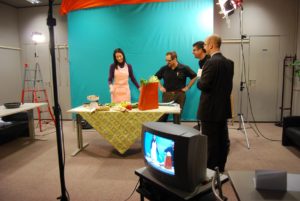 2. The spectator becomes actor
Except for the conventions organized to launch a product and for the highly technical ones, it’s getting more and more common the attempt to involve the participants not only during the event (televoting, small team building experiences, etc) but also in the preparation of the communication material.

Nowadays everyone has the technologies for the creation of videos always close at hand (literally! Every telephone has a camera!) and non-professional videos are becoming incredibly popular and ironic videos about corporate themes with the company’s employees as participants and to use them as a support for the presentations, adding a dynamism and an involvement that a power point slideshow could never achieve. We are not talking of an alternative to the speaker but of a way to make the presentation more complete and interesting.

The quality of the video can vary depending on the goals and budgets, but an unprofessional editing of a video realized with a smartphone is not necessarily worse than a professional production: the context allows some informality and the public accepts it gladly.

3. An experience, as an example
A multinational company had created a transnational team to define the competences of the management and share them in all the countries where the company is present. The results needed to be approved by the management and subsequently had to be transferred to thousands of employees. To optimize the costs it was decided to create videos that could be seen n all of the three platforms picked for the project: official presentation, traditional training and intranet.

The process of creation of the content – a rather complex one – was structured in a series of steps: 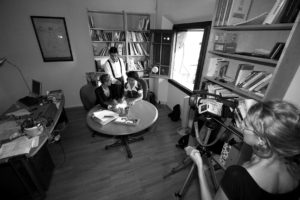 4. This is already the era of the Video 2.0
The example above refers to a huge multinational company but with the help of competent professionals and accessible budgets even a medium-sized company can create “new-videos”, improving its communications and the involvement of its employees. In brief, a new way of communicating and training is being created, as it happened to the theatre, that evolved into the “corporate theatre” a self-standing and well defined instrument of communication. 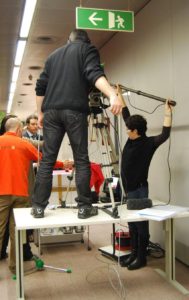 Also the “corporate video” is innovating the way of communicating inside the company thanks to the development of its own techniques and languages, some of which still have to be discovered. Of course this video is very different from the shooting of a simple theatre play realized in/for the company, the documentary video of the company’s activities and from role playing and similar.

Those who want more details should surf on websites such as www.ted.com, www.meettheboss.tv or the rising www.videodimpresa.it. These are instruments easy and useful to understand how the “new video” can spread the corporate messages with a lot of advantages, among the others the lack of constraints on the “when”, “where” and “how” to receive the messages, thanks to the possibility of commenting, being involved and even uploading ones own videos and sharing them. Like a small company oriented youtube.

5. Where to start?
What if a company wanted to work on a “zero budget” basis? It’s always possible to take advantage of internal talents: do you have a colleague that keeps bothering you with the videos of his holidays? There it is the director! The sales manager is famous for his brilliant jokes? Protagonist! Head of planning and development? Script and storyboard! You lack a nice story? Use the fairytales as metaphors: Snow White or Cinderella are a great starting point… Start in a simple way: you’ll see that many people will get involved!